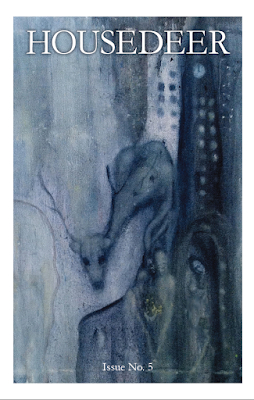 Issue Number Five features the legendary Agosto Machado, one of the last remaining performers from a truly golden age of theatre in New York. He learned his craft by doing it. He worked with Jack Smith and Mario Montez, with John Vaccaro and his Playhouse of the Ridiculous, with Jackie Curtis and Ellen Stewart at La MaMa, with Hibiscus and the Cockettes in San Francisco and New York, and with many others besides. And he continues his work in the present.

As both a longtime recorder of history and marvelous story teller, Agosto is often sought out by documentarians. You may have seen him in Beautiful Darling, the documentary about Candy Darling, or in Pay It No Mind, about the fabulous Marsha P. Johnson. You may have seen him on the various stages of downtown, where he often appears, sometimes in a splendid gown. His issue of Housedeer is full of beautiful recollections and wandering thoughts, and all the greatest stars of downtown twinkle in its pages. The deer art on the cover is a painting by Charles Schick.