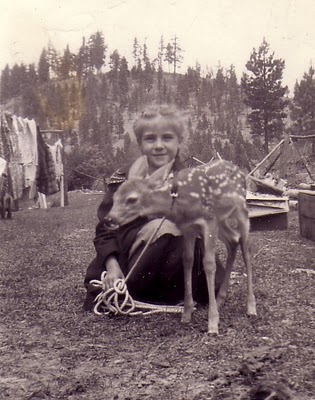 Housedeer is a small printed magazine with each issue devoted to one particularly interesting individual.
The name comes from a story about a Montana rancher named Margaret Gilfillin. She lived in a log house that she built for herself, with two deer, taken in as fawns. They grew into big deer and slept with Margaret on her bed. As a solitary lady rancher in the 1940s, Margaret was an iconoclast even in the wild west. Likewise, her two housedeer were iconoclasts among Montana deer. But to all of them, life was just life, the way it had been dished out, and they lived it fully and without question.

The photo at left was taken with a Kodak box camera in 1947, by Kenneth Chapman, of his daughter and one of Margaret's little deer. Below is the only known photograph of Margaret Gilfillin, from the back so that her face remains a mystery.